In the past the Göttingen Debating Society has mostly been active on the stage of German language debating. But however this year we decided to attend the European Universities Debating Championships (EUDC) which is a debating tournament for universities from all over Europe (but also Kazakhstan, Israel and some other nearby countries) hosted in Vienna this year. These international tournaments take place in English language.
It was clear to us that we wouldn’t win anything at the tournament except for experience and new acquaintances.

International tournaments (like the Euros) normally have at least two different competitions depending on the language proficiency of the participants: „English as proficient language“ (EPL) and „English as second language“ (ESL). All participating teams are in the same pool during the preliminary rounds, but for the knock-out rounds the field is split into these categories. The World Universities Debating Championships (WUDC, this year in Thessaloniki) usually also feature a third category „English as Foreign Language“ (EFL) for students who exclusively used English in school.
Our two teams (DCGA A: Alex and Quirin, DCGA B: Sebastian and Ruwen) started in the ESL competition. We had a lot of fun although in terms of a good ranking we were not that successful. In particular Sebastian and Ruwen were lucky (?) in the beginning to start in a real toproom (the first round is shuffled) with the first teams from Oxford, Tel Aviv and Trinity College Dublin. Unluckily they only made the forth position – no shame in that room I guess.
Janni represented Göttingen as a judge and also advanced in the top room for one round which one might read as a sign that he wasn’t doing his job so badly. Nikos joined his old colleague Konrad from Tübingen for their team.
The Debating Society Vienna („Debattierklub Wien„) demonstrated impressing professionalism regarding their wonderful organisation of the tournament and a lot of nice socials – even after the quarterfinals had to be cancelled because of a fire alarm. Thanks for their work!

The impressions from Vienna did not depress us much because of the bad results but have indeed motivated us to attend more international tournaments in the future. If you are also interested in international debating just contact us or join our English debate on Mondays (during the lecture months)! 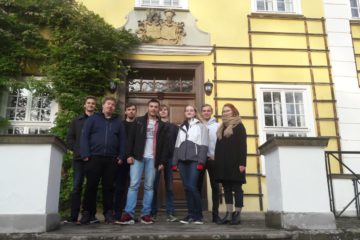